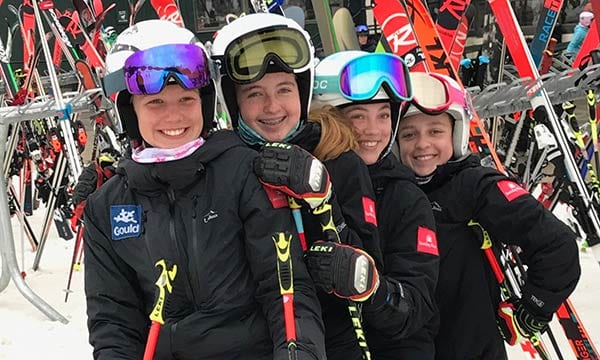 My chin dropped against my helmet strap as I watched my 7-year-old daughter rip down the fall line in an athletic stance, ski edges tipping effectively, hands forward. This was the moment I dreamed about through all those missed ski days during pregnancy, those powder days I passed up during the early sleep-deprived years. We were the couple who placed plastic skis in the toy box before she could walk.  We took our daughter out on snow just before her second birthday. That poor parenting moment resulted in tears (on my part) and frustration (my husband) because all she wanted to do was make angels in the snow.

Not so secretly, we felt as if our kid needed to ski and needed to ski now because skiing was our life. To our credit, over the next five years we pulled ourselves together and kept our little league parent fever in check. As two ski industry professionals, we made a conscious effort not to over-terrain our daughter. We worked our way from magic carpets to greens and slowly to blues. Not to say we didn’t have our foibles when we took a wrong turn onto a mogul field at a new resort or when a beginner lift closed and we had to ski challenging terrain down the mountain. We’d watch her ski defensively, brace her turns, and drop her hands, all while screaming and complaining. But those were exceptions to our rule.

We enrolled her in ski school: Her first half day at the Tree House at Snowmass in Colorado (she was crying, I was crying but she was all smiles when we picked her up), multiple days at Vail (where she got to meet Lindsey Vonn), her first powder days at Crested Butte (they taught her the joys of tree skiing) along with Eldora, Monarch, A-Basin, Copper, Breck, Keystone and Beaver Creek. She had fun during her lessons and we reinforced what the teachers said during our family free ski time. Her lessons focused on the basics such as honing her athletic stance (which is difficult for young kids because the lion’s share of mass is located above their shoulders), standing on the outside ski and turning her legs rather than your upper body. The lessons helped her develop her skills and solidify a foundation that would set her up to becoming an all-mountain skier.

The next step for our daughter was Junior Race. I myself grew up racing and my father is still a master’s racer. I coached at Ski Club Vail and Eldora Mountain Ski Team before I turned to teaching women—running the women’s program across Colorado and leading women’s ski trips to Canada (heli skiing) and Japan (Ja-pow!). You’d think I’d know exactly what were getting into. But things change when you’re a parent. Call it helicopter parenting, little league parenting, mamma grizzly bear instincts, whatever the label, these feelings of protectionism rear their ugly head no matter who you are or what your profession is.

I was not mentally prepared for the differences between the Guest Centered Teaching approach of ski instruction (and they’re working for tips, I might add) and team-centered racing experience provided by coaching. Ski schools generate revenue for the resort (over $900 a day for a private lesson at some areas). Conversely, the ski club is a non-profit organization with few paid staff members. The club depends on volunteers and the work credit program actively involves all parents. The differences between ski school and ski racing: racers aren’t getting their hands held by an instructor and they don’t get to cut lines. Racers might not get the personalized attention one would get in a private lesson. Racer parents don’t get a report card at the end of each lesson.

But here’s what we are getting: A chance to teach sportsmanship and the value of a good work ethic to our child, the camaraderie of being on a team and belonging to a club, ownership through our involvement with the club, an introduction to the world of ski racing, time to support our daughter at races or during fundraising activities, USSA coaches who work on alpine fundamentals, balance and all-mountain skiing as well as teaching safety on the mountain, the opportunity to meet other ski families and ski with parents, and the knowledge that we’re helping our child develop skills to become a life-long skier.

After two seasons of junior race , our daughter moved up to the Core program. She’s now a U14 and raced her first Super-G race last year at the Prater Cup in Crested Butte, Colorado. The intensity level has increased significantly from those Junior Race days, but it’s exciting for our daughter to learn new skills and test herself at higher levels. At its core, the ski club is dedicated to inspire athletes—and we’ve witnessed that through the hard work of the coaches. We look forward to skiing with our daughter, who has blossomed into a confident all-mountain skier. I’d encourage parents to take some family days together this season. During the day, ask your child what they’re working on and where they like to go skiing (as an instructor, I’d advise you not to over-terrain your child before they can ski steep terrain without getting into a bracing, power wedge). If you reinforce what the coaches are working on by having your child use his or her own words, it’ll set the family up for success.

It’s important that kids have a positive skiing experience so that the whole family gets to stay in the game. After all, a family that skis together stays together. A Snowbird ski instructor of my daughter’s once told me “the critical thing to remember is that we all ski because it’s fun for us. That’s our big motivation. For kids, they are purely fun focused.” Skiing reminds us that at the core, adults are the exact same way no matter who you are, or what your profession is.

Get updates on what we're doing — add your email.